Lost paradise, imaginary lands, utopia or dystopia, these are themes that artists have explored across history. Here four very different artists present their own fantasy or allegorical landscapes, sometimes populated with figures or animals. All reference, in their own way, art history, natural history and contemporary culture.

Gail Boyajian sees landscapes as characters created by the voices and ghosts of present and past inhabitants, artistic efforts, religious beliefs, geological formations and life forms other than human, in dialogue with each other.

Peter Burns’ work explores the relationship between people, nature and the universe. They are playful re-workings of romantic themes with allusions to faraway places and deliberately eschew the notion of beauty.

Margaret Corcoran’s paintings revisit historical eras with the aim of illuminating how the world was once seen, or particular how societal points of view about the landscape  influence art making.

Jonathan Hunter’s seemingly spontaneous creation of imaginary landscapes offers a romantic notion of nature and the relation of humans to it. 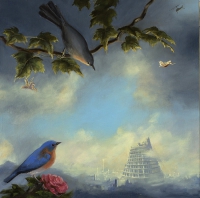 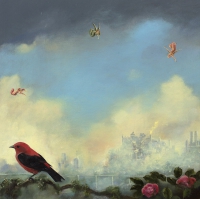 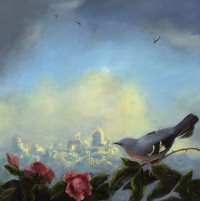 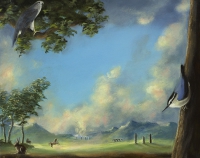 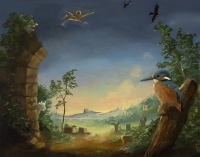 Peter Burns, Domain of the Bambino of Arcoel

Peter Burns, Ruins of the Future

Jonathan Hunter, The Cuckoo of Awareness