Working on the border between the abstract and figurative, Crozier brought a bold simplicity and power to his work, characterised by vibrant colour, energetic mark making, and rigourous composition. Born in Scotland of Irish parents, and educated at Glasgow School of Art, Crozier became an Irish citizen in 1973 and lived and worked by Roaringwater Bay in West Cork for large parts of the year. He had a distinguished reputation in Ireland, Britain, and continental Europe, winning many awards and honours for his art. Crozier died at age 81 in 2011.

Crozier is represented by the Taylor Galleries in Dublin and Flowers Gallery in London.

The gallery featured a solo show of Crozier’s small works in 2014.  His work also featured in the summer 2017 exhibition West Cork Masters from June 30 to July 20. 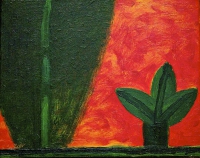 Hay Ricks by the Sea